This weekend we hosted Dylan Bernstein at the Mad Hatter Cafe in Hove. 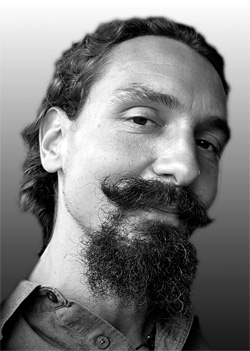 I’d met Dylan a few years ago through a mutual friend Shari Berman and we’d stayed in touch since. He travels half the year teaching Ashtanga Yoga and is based in Hong Kong the other half of the year where he runs a Mysore programme. He also teaches each year for Prem and Radha in Bali. He’ll be there again this year in late June.

I’d describe Dylan with two words: Radiant and balanced. The man has a beautiful complexion and bright shiny eyes. He’s a picture of vitality and health, which I assume is a combination of genetics and many years of dedicated practice. He’s the kind of guy who makes women’s hearts flutter and men grind their teeth resentfully. What I also found very attractive about him was his balanced disposition and I’m not just talking about his handstands. There’s a tendency amongst Ashtanga practitioners towards rigidity and dogmatism. It’s got something to do with the A type personality and the commitment required to maintain daily morning practice. Dylan is very much part of the living tradition of Ashtanga yoga having just spent two months in Mysore practicing with Sharath and yet he exudes a confidence and lightness about his practice and the lineage.

On Saturday we were joined by quite a few guests from London. In the morning we kicked off with a traditional Sanskrit counted primary going as far as Baddha Konasana before doing back bends. But before we started our asana practice Dylan demonstrated Nauli kriya and we all had a go. He spoke about the relationship between Prana, bandhas and the breath. In this context he introduced the 5 vayus – Udana vayu, prana vayu, samana vayu, apana vayu and Vyana vayu.

Dylan reminded us of the need to ground as well as lift during our practice. He also emphasized awareness of the bandhas and initiating movement from within the breath. So starting the inhale or exhale and then following with movement rather than moving and then breathing. I found this really challenging as I’ve gotten into the habit of moving first and then breathing. So it was a timely reminder to change my pattern: Breath initiates movement.

We took a two hour lunch break and the afternoon session was a whirlwind tour of the history of yoga philosophy and it’s roots. Dylan spoke confidently and astutely for two and a half hours. I was worried about this in the planning stage as I thought people might find it boring but Dylan is not hard on the eyes or ears and he knows his subject intimately. We touched on the Vedas, Upanishads, Bhagavad Gita, Patanjali’s Yoga Sutras, the Buddha, Tantra, Advaita Vedanta, Hatha & Ashtanga Yoga. The session was informal and relaxed and there were good questions and discussion.

Here’s a brief summary of the session: There exists something divine and changeless and a spark of this unchanging divinity exists in all of us and that our role in life is to discover, connect and live this truth (Dharma). This truth isn’t a single truth for everyone but rather many truths for different people at different times. These different truths aren’t exclusive but rather co-existent. We also touched on the role of Karma in our lives. This plays an important role in discovering and living your Dharma.

Dylan gave the example of Arjuna before the great battle of Kurukshetra. Arjuna a mighty warrior sees that great death, suffering and destruction is coming in the battle and is reluctant to fight. Krishna convinces him to fight saying that inaction is not possible. Krishna asks Arjuna: “O Arjuna, how can a person who knows that the Atma is indestructible, eternal, unborn, and imperishable, kill anyone or cause anyone to be killed?”. Krishna goes on to add: “A Karma-yogi gets freedom from both vice and virtue in this life itself. Therefore, strive for Karma-yoga. Working to the best of one’s abilities without getting attached to the fruits of work is called (Nishkaama) Karma-yoga.” Arjuna’s admirable compassion is in this case overruled by his need to fulfill his truth as a warrior. We have a tendency to emphasize skillful action as being that which brings the least or no pain to others or oneself. But in Arjunas case many die in the battle as a result of his skillful action. This is philosophically rather challenging and even unpalatable to the Western mind.

We also touched on the importance of viveka or discrimination. This quality is needed in order to discriminate whether a course of action is skillful or unskillful. The Buddha was revolutionary in that he encouraged his followers to question even his own teachings and to rely instead on their own experience.

On Sunday (the biggest Moon day of the year) we did morning Mysore style practice. The room was busy, hot and sweaty with more of the local Brighton Ashtangis joining in for this session. Dylan has sure, experienced hands when it comes to adjustments. At the beginning of the session he gave people permission to make whatever modifications they needed and to do their own practice as usual. The two hours flew by.

The afternoon session was good fun. It started with an introduction to the Ashtanga Yoga Pranayama series – normally taught after intermediate series is completed. Then we moved onto exploring jumping into handstands with the help of a partner, jumping through, jumping into bakasana, jumping into bujapidasana and exploring the role of gluteous maximus in back bending. Again the emphasis was on moving from within the breath.

There was also a Q & A session at the end where people had a chance to raise any questions that had come up as a result of the workshop. I really enjoyed the workshop and got lots of positive feedback from those attending. Dylan had a great time too so hopefully we’ll be having him back again next year.

The next workshop in Brighton will be on September 1st and 2nd. Joey Miles will be returning for another weekend workshop – definitely a date for the diary.

I’m the founder of Ashtanga Brighton and have been getting on my mat since 2006. Originally from South Africa, I grew up during apartheid but moved to the UK in my early twenties - and haven’t looked back since. I’m passionate about freedom and creativity and now run a digital media agency, Wildheart Media - helping yoga businesses grow.
View all posts by Guy →
coming up to standing from drop backs
Joey Miles Brighton workshop