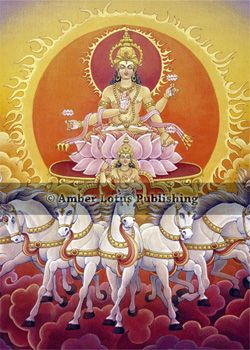 The Sun Lord Surya is the king of all planets. He is represented as a warrior king in a chariot, driven by seven horses that represent the colours of the rainbow. He holds the lotus of purity in 3 hands and grants fearlessness with the fourth. His charioteer is the beautiful Lord of Dawn.

Surya is purifying male energy, stable, selfless, strong and authoritative. The sun god provides vitality, immunity, prosperity, cheerfulness, ambition and fame. Surya is the first manifestation of the supreme principle. he also stands for ritual sacrifice as he burns with a fire made of his own body.

I’m the founder of Ashtanga Brighton and have been getting on my mat since 2006. Originally from South Africa, I grew up during apartheid but moved to the UK in my early twenties - and haven’t looked back since. I’m passionate about freedom and creativity and now run a digital media agency, Wildheart Media - helping yoga businesses grow.
View all posts by Guy →
commenting fixed
aloha ashtangi’s