I know a lot of practitioners who don’t know the closing mantra and after my previous post: Learning the opening mantra I had a request for the closing or Mangala mantra as it’s traditionally known.

The opening and Mangala mantras are chanted at the beginning and end of each led practice at the KPJAYI in Mysore. The opening mantra is also chanted at all Ashtanga shalas around the world during a Mysore style class. The Mangala mantra however slips through the cracks as people don’t all finish at the same time, so it’s difficult for a teacher to teach this in class.

These two chants set our intention when we practice. In the opening mantra we pay our respects to the supreme guru – this could be an actual guru or Patanjali, or it could be the practice itself. The second part of the Opening mantra is a dyana sloka, a visualisation of Patanjali the sage attributed as the author of the Yoga Sutras. 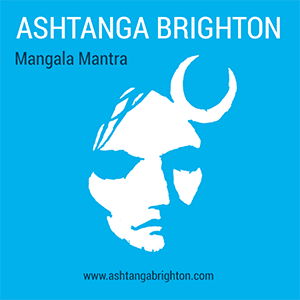 As in the previous opening mantra MP3, I’ve chanted the Mangala mantra slowly so that it’s easier to learn the pronunciation. Save the MP3 on to your phone and keep practising until you can say all the words confidently and then memorise each line until you know all of it by heart. The power of memorising chants is that you can use them whenever needed. Perhaps you’re frustrated by the traffic or the queue, why not start chanting under your breath and see if that makes any difference to your experience.

The Mangala mantra is a prayer that directs our focus outwards, in particular, asking that the leaders of the world protect the earth and rule justly. In this age of environmental and political crisis I can’t think of a chant that we need more! What’s also significant is that the closing mantra brings our practice off the mat and into the world. Our asana practice is not just for our own good, it’s for the good of the world, without sounding too grandiose about it, of course!

The opening mantra doesn’t identify a divinity and while it uses a visualisation of Patanjali – we’re not praying to Patanali – we’re paying our respects to him and his teachings on yoga. The Mangala mantra is a little different. In Vedic Astrology, Mangala is the God Mars. He’s the God of war and is also celibate. Mangala also represents drive and physical energy, self-confidence and ego, strength, anger, impulsiveness, heroism and adventurous nature. The chant doesn’t however directly invoke Mangala by name except in the title.

If you’re an atheist then none of this really matters and the meaning the of chant is still very relevant in today’s society. If you’re religious however then you could direct the prayer to the deity of your choosing.

I’m the founder of Ashtanga Brighton and have been getting on my mat since 2006. Originally from South Africa, I grew up during apartheid but moved to the UK in my early twenties - and haven’t looked back since. I’m passionate about freedom and creativity and now run a digital media agency, Wildheart Media - helping yoga businesses grow.
View all posts by Guy →
learning the opening mantra
Mysore self-practice demystified