I’ve been meaning to blog about this for a while. I was in Edinburgh for a week in December 2010. Before I went I did a bit of research to see if I could find a Mysore room to practice. I was slightly surprised that there wasn’t a more established Ashtanga community in Edinburgh.

Rowena was away on honeymoon and Karen was away in Mysore. Fortunately one of her students an Australian called Tim was opening up the studio for morning Mysore practice. 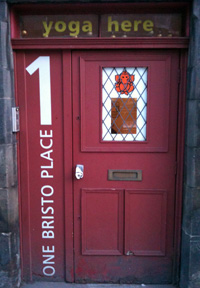 The Bristo Yoga School is located in a basement under a church. There’s lots of space and thick mats on the floor which make balancing in Uthita Hasta padangustasana rather challenging. There was a small group of about 5 or 6 of us practicing each morning.

I quite liked the down to earth urban setting and instantly took a liking to my host Tim which always helps. He’s been to Mysore so we chatted about his experiences – he loved it and his comment was that practicing in Mysore adds an extra 25% energy to your practice.

I had a great time in Edinburgh and it’s always lovely to meet other practitioners and have a place to practice while away from home. A big thank you to Tim for being so welcoming. Hopefully I’ll get a chance to return the hospitality when he next visits Brighton.

I’m the founder of Ashtanga Brighton and have been getting on my mat since 2006. Originally from South Africa, I grew up during apartheid but moved to the UK in my early twenties - and haven’t looked back since. I’m passionate about freedom and creativity and now run a digital media agency, Wildheart Media - helping yoga businesses grow.
View all posts by Guy →
practice and diet
come sing your heart out with Narayani