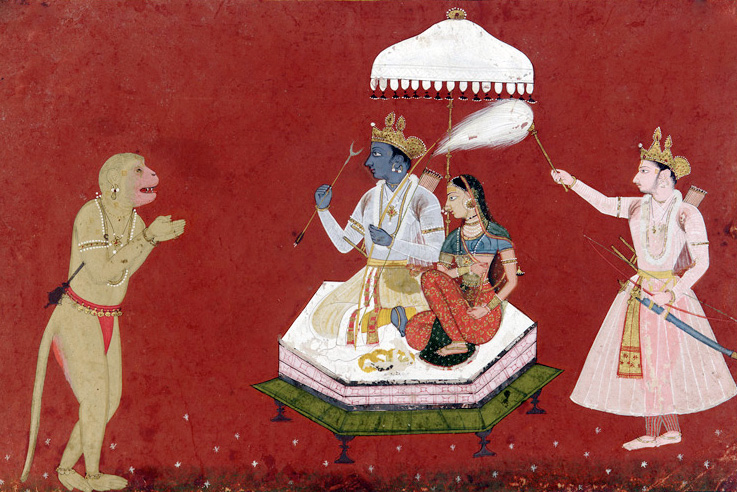 The word out on the street is that it’s Hanuman’s birthday – So rock on Hanuman! Check out Tim Miller’s blog post about this most auspicious time. Not only is it full moon but it’s also Easter! I particularly like this part of Tim’s post: “Hanuman is considered to be the embodiment of what ayurveda calls the ‘three vital essences’ – Prana, Tejas, and Ojas. Prana is the life force, the Air element that gives us energy, intelligence and adaptability. Tejas, the purified Fire element, gives us glowing health, strength and courage, and penetrating insight. Ojas, the essential Water element, keeps us juicy in mind, body, and heart and gives us endurance and devotion.”

The Hanuman Chalisa and other prayers are usually offered to Hanuman during a dawn puja when it’s said that Hanuman’s power during this time is amplified over a 1000 times.

Origins of the Hanuman Chalisa

Hanuman is an incarnation of Lord Shiva. He’s worshiped as a symbol of physical strength, perseverance and devotion. He’s a devoted disciple of Lord Rama and also the only deity not afflicted by Shani (Saturn).

A couple of songs for your iPod today: Rock on Hanuman by Mc Yogi and Sita Ram from Narayani’s beautiful 2nd albumn Maatri Sharanam.

I’m the founder of Ashtanga Brighton and have been getting on my mat since 2006. Originally from South Africa, I grew up during apartheid but moved to the UK in my early twenties - and haven’t looked back since. I’m passionate about freedom and creativity and now run a digital media agency, Wildheart Media - helping yoga businesses grow.
View all posts by Guy →
You are not your ego and your ego is not you.
Sharing the greatness of Saturn