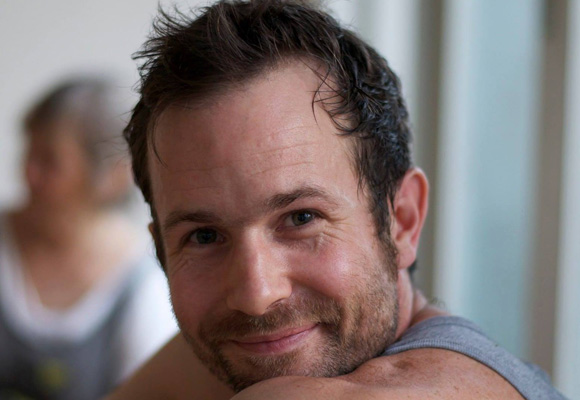 I first met Scott on the 26th April 2008 and no I don’t have a good memory. The only reason I can pinpoint the date so accurately is that he organised a workshop with Prem Carlisi in Tunbridge Wells and I wrote a blog post about it a couple of days later.

Over the years our paths have criss-crossed from Brighton to London through both work and practice. I’ve gotten to know Scott and Louise well and they even came to our wedding in Sweden.

Scott has been running Stillpoint Yoga London near London Bridge for over 5 years now and its really blossomed over the last couple of years.

I practice after work (10am), mid morning or early afternoon, before the boys come home from school. Generally 5 times a week.

I have been practising for around 14 years with a more consistent and dedicated practice in the last 4-5 years. I was 28 when Herbie was born. I actually started practising Ashtanga yoga the year he was born in 2001.

Because I began Ashtanga yoga after I became a father I always fitted my practice around family, so I reckon I practiced 3-4 times a week around the first few years of his life. It was when Noah and Ethan were born that practice/work/family life clashed so I had to do what I could to sustain all of those things. Rather than practising a 6-day strong asana practice, my practice became more about maintaining an equilibrium in myself to support Louise and the children as I had a full time job. So less became more meaningful, finding small nuggets of time to practice on my own, then maybe some Mysore classes in the evenings (or if I was working somewhere near a Mysore shala in London). It was as the boys got older and my work circumstances changed that my personal practice was able to as well.

Yes, Louise does practice. She has been able to find more time to practice since the boys started school.

That’s a tough question as I’ve been practising the same length of time as being a father. So you could say that at the same time as I’ve been nurturing my practice, I’ve been nurturing the shifting sands of fatherhood. As my practice has matured over the years I do think I have become more open and attentive to what it means to be a father to the boys, their particular traits and characteristics and the responsibility that goes with all of that.

I wouldn’t say it prepared me. As I said above, my Ashtanga yoga practice and fatherhood have grown together so I feel that I have tried to hold both in my life, but with fatherhood and family being what I practice for.

Because I’ve been a father for 14 years the way I manage my health has changed over the years, especially the bigger the family has become. Up until 2012, before I ran Stillpoint Yoga London on my own, I had a full time job on top of running the London Bridge morning Mysore classes. It was really hard to manage energy levels but I’ve been incredibly fortunate in having a wonderful partner, Louise, who has supported the transition I’ve made over the years. Yes, I think for me that’s been it. A relationship built as much as possible on support and love for each other.

Intimately watching them grow and knowing I am partly responsible for the way they are has been hugely challenging and liberating… Also I get to hang out and spend my life with 3 boys who make me laugh, make me feel proud and most importantly give me purpose.

That life is always shifting, moving. That before you know it, they are a new age with different needs and concerns. I had a sudden realisation when Herbie was 7, that I was 36. I was amazed at where the time seemed to have gone. It wasn’t the sense of time slipping away but that it seemed to be going so fast. That’s when my practice changed to a more introspective and meditative quality with less focus on attainment and more on just being in the practice. Not forcing just allowing, as if I was trying to become more present to life as it happens. It’s not to say life now doesn’t sometimes feel like it’s flying by, but the seeds and qualities of practice are always there and can be drawn on.

That if your asana practice falls away for a short time that’s okay, just keep your gaze on how you are shifting your personal viewpoint regarding your new responsibilities as a parent. Become more attentive to the breath and remember that asana practice is teaching us patience, something we sometimes need in abundance as parents… The first few months of being a parent of a new child are so rich. Enjoy this, together. Then when the bubble begins to recede and your new family turns into just how life is now, return to your mat and continue to see what you find but with the bigger picture in the background.

If I had done anything differently I wouldn’t be where I am now, and with the family and love I have in my life at this point, that’s just fine.

I’d like to thank Scott for taking the time to share his experiences of practice and fatherhood in such an open and honest way and invite you to leave a comment below. How has parenthood affected your practice and family life? If you think this blog post would be useful to others then please share it on your favourite social network. And don’t forget to sign up to our newsletter below the comments section so you won’t miss the 3rd and final instalment in this series with Hamish Hendry.

I’m the founder of Ashtanga Brighton and have been getting on my mat since 2006. Originally from South Africa, I grew up during apartheid but moved to the UK in my early twenties - and haven’t looked back since. I’m passionate about freedom and creativity and now run a digital media agency, Wildheart Media - helping yoga businesses grow.
View all posts by Guy →
Ashtanga practice and fatherhood: part 1 with Joey Miles
Ashtanga practice and fatherhood: part 3 with Hamish Hendry

2 Responses to Ashtanga practice and fatherhood: part 2 with Scott Johnson