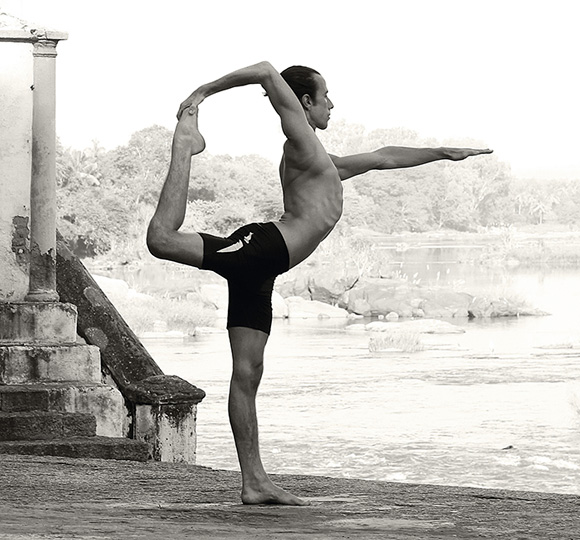 Leia and I cut our year-long stay in Mysore short after 7 months. Why? Well, Leia is pregnant. So we decided to return to her home country, Sweden, and make the big move to Stockholm. We left Mysore at the end of April and our possessions finally arrived from England in early July. It’s been a time of great upheaval for sure but also great excitement. I feel blessed.

I feel ready to be a father. I know I have everything to learn but within myself I feel ready. I also feel grateful that Leia is pregnant: coming from a generation that chooses family life later and later, we’re very fortunate. The last few years have been really tough in terms of my own practice and this year I finally had an MRI of my spine and discovered what I had long suspected: that I have disc bulges and desiccated discs on L4 and L5.

I attribute this to jumping off a moving train as a teenager and landing on my coccyx, but I suspect that genetics also has a big part to play too. Post-practice backache has been gradually increasing and I’ve been completely drained after practice; this has had a negative effect on both my work and my relationships. Basically, I’ve been pushing too hard.

A few months back my friend Scott gave me a copy of a great book called ‘Family Wakes Us Up’. The book consists of letters between two expecting fathers and is co-authored by Michael Stone and Matthew Remski. I’m inspired by both of their work. As Leia’s belly swells and her body undergoes profound changes I’m going through my own deep internal processes of change.

While the changes Leia is going through are most noticeably physical, mine are much more internal. My attitudes towards myself and others are shifting. My priorities and goals are changing. I’m slipping out of the central axis of my life, creating new space as new constellations emerge with their own gravitational forces and their own orbits.

My practice has also dramatically changed. More on that coming up in another post. But my goals for practice are all focused on having more energy, fitness and strength. I’ve taken the opportunity to reach out to 3 practitioners I know who are also fathers, asking them questions about their own experiences as fathers and practitioners. I sent them each a series of questions to answer. In this first post on practice and fatherhood, Joey Miles responds.

I met Joey back in 2008 at a yoga camp where he was teaching. Over the years I’ve gotten to know him and his family and he’s become a dear and close friend. As a practitioner Joey is highly capable, blessed with great genetics and discipline, and committing to the practice at a young age. On his latest trip to Mysore he completed 3rd series with Sharath Jois.

Joey and his wife Donna left London in 2009 and set up Ashtanga Yoga Leeds.

I practice 5 or 6 days a week, sometimes I get up early a few days a week at 3:30am and practice before teaching, other times I practice mid-morning after teaching or after dropping the kids off at school.

I started a daily practice aged 17, so I have practised 17 years now. Caleb was born when I was 25.

Becoming a father was a big culture shock. I basically realised that pre-fatherhood my life really only revolved around me! With a baby I was no longer the centre of my world; Caleb was my centre and I loved that, but it was a massive shift. I tried to continue getting up at 4am to practice, and I did that a lot, but soon I realised I was often exhausting myself in the process. (Daisy was born just 20 months later so I had 2 kids under 2.) Physically I could still do 1st, 2nd & 3rd series – but often it just left me too drained to be a good father, husband and teacher.

So I changed how I practised. I still did surya namaskara and standings every weekday, but I did a lot more restorative forward bends with the head supported, and I did loads of rope and chair inversions. Many a morning at Triyoga people found me asleep in supported supine poses or hanging on the ropes like a bat! When I had more energy I still tried to do ‘normal’ Ashtanga practice, and we took the kids to Mysore when they were young (Daisy had just turned 1 and Caleb was 2); during those trips we did consistent, strong practice but it’s different there because you do not have to go to work.

It’s also worth mentioning that it was only shortly before becoming a father that I met Alaric Newcombe (a senior Iyengar teacher). So it’s hard to know how much I was adapting practice because I became a dad, and how much I was adapting from regular class with Alaric. I do remember learning so much new stuff that as I applied the actions learnt from the previous day’s class, simple standing poses took over an hour, hence not having time or energy to continue into a series.

Donna has also practised about 17 years. I am sure parenthood had a huge impact on how Donna approached practice, but you had better ask her directly.

That’s a great question, but it’s impossible to answer – to my kids yoga is so normal & everyday it’s boring. Last summer Caleb made a great remark which probably summed up his opinion –
“Grandad is really interesting and knows all about history and stuff, but all you do is flex your body”.

I do not think yoga prepared me for fatherhood; frankly, I was young and not really prepared and I don’t think anything could prepare you. Drawing parallels between yoga & fatherhood seems a bit dubious to me.

When Daisy (my second) was born, I really knuckled down. I didn’t have a beer for a year. I tried to eat well, but frankly I drank more coffee than ever, and like I said before I did more restorative yoga practice to tackle lack of sleep.

It gives me a massive sense of purpose, it made me way less selfish, and the love is indescribable. My Mum used to say “I love you more than you can understand”, and now I am a father I think I know what she means.

Having kids has helped me see that all things are interconnected, that time is precious and everything is always changing. (It feels like the babies were born yesterday but now they are so big.) Yoga practice is a major and deeply significant part of my life, yet having kids puts the formal part of practice in perspective – don’t get me wrong, the formal practice is important – but it’s way more important that I listen to my kids and stay kind. Sometimes I am tired and ratty and I snap at the kids, or lately with our marriage falling apart I am painfully aware that I am not always very present with the kids, I have been pretty self absorbed. Yet the attitude of equanimity and awareness I try to cultivate in my yoga & sitting practice can be redirected into really present, caring and good parenting.

Lately as I came out of silent retreat I could really feel myself being present with the kids and giving them space. There was no hurry, less reactivity, just a huge sense of peace and that everything was in its perfect place in the world, even though I never envisioned being a single dad and going down the whole modern co-parenting trip.

Just do whatever works for you, but remember asana should serve you and your family.
The early years can be intense but they are so precious, so if you do not ‘maintain’ such a strong practice I would not worry, it all comes back. And if you have fatigue and sleep deprivation then personally I found using props and support invaluable. On the flip side sometimes you get so loved up you turn toward practice with over enthusiasm.

No, I have made all sorts of daft mistakes, but that’s ok.

I’d like to thank Joey for taking the time to share his experiences of practice and fatherhood in such an open and honest way and invite you to leave a comment below. How has parenthood affected your practice and family life? If you think this blog post would be useful to others then please share it on your favourite social network. And don’t forget to sign up to our newsletter below the comments section so you won’t miss the next instalment in this series.

I’m the founder of Ashtanga Brighton and have been getting on my mat since 2006. Originally from South Africa, I grew up during apartheid but moved to the UK in my early twenties - and haven’t looked back since. I’m passionate about freedom and creativity and now run a digital media agency, Wildheart Media - helping yoga businesses grow.
View all posts by Guy →
Joe London – from Mysore with Bliss
Ashtanga practice and fatherhood: part 2 with Scott Johnson

3 Responses to Ashtanga practice and fatherhood: part 1 with Joey Miles