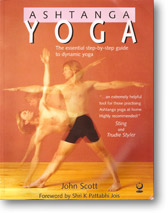 I thought I’d start off with the first book I bought. I’d been practicing Mysore style for 9 months at BNHC and didn’t know the names of the asana in the primary series. I was also curious about the illusive bandhas, mantras, dristi, ujjayi breath and the philosophy behind Ashtanga – the 8 limbs.

The book fittingly opens with a dedication to Ashtanga Guru Shri K Pattabhi Jois and the opening mantra with translation. After the blessing given in the Foreword by Pattabhi Jois I was interested Scott’s personal story and a brief history of this form of yoga. The book is organised into 3 parts:

Part 1, The way of Ashtanga Yoga starts off by introducing each of Patanjali’s eight limbs to the tree of Yoga: Yama (moral codes), Niyama (self-purification and study), Asana (posture), Pranayama (breath control), Pratyahara (sense control), Dharana (concentration), Dhyana (meditation) and Samadhi (contemplation). This section is an introduction to some deeply profound life changing principles. I was struck by the similarities between the 8 limbs of yoga and the noble 8 fold path from the Buddhist tradition.

Part 2 is a very useful presentation on Vinyasa, also covering the 3 bandhas: mula, uddiyana and jalandhara bandha in an accessible way. Scott also introduces all the different dristis and there is also a bit on the elemental state of Tristana. I can’t say I grasp what was written on Tristana, but as Scott puts it, ‘Tristana is achieved through repetition’. Sounds like more practice to me : )

With the foundation of the practice explained, the next section gets into the nuts and bolts with a detailed breakdown of the sun salutations – Surya Namaskara A and B. There is also a handy section on the transition movements, breaking down all the movements by exhale and inhale.

The 3rd part of the book is a step-by-step walk through of the primary series asana grouped into three sections: standing sequence, seated sequence, and finishing sequence. Each asana is explained, following the path of inhalations and exhalations. Nearly every asana has a tip or caution box with useful advice for that posture.

This is a great book to get explore the journey of the primary series. But like any book on yoga, it does not replace actual practice with an experienced teacher. Scott says ‘It takes a combination of dedication, discipline, motivation, and stamina to achieve lasting benefit. Ashtanga yoga is a daily practice, one that ultimately becomes a way of life.’

I’m the founder of Ashtanga Brighton and have been getting on my mat since 2006. Originally from South Africa, I grew up during apartheid but moved to the UK in my early twenties - and haven’t looked back since. I’m passionate about freedom and creativity and now run a digital media agency, Wildheart Media - helping yoga businesses grow.
View all posts by Guy →
The other 1%
Maintaining a committed practice