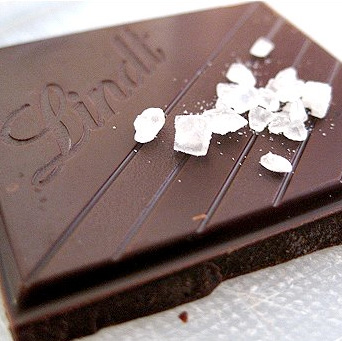 2014 continues to be a year of big changes. In this post I share my experience of giving up chocolate, cake and pastries.

You might be thinking: “oh here we go, another food obsessed Ashtangi acting out on his control issues around food”. Or you may be thinking: “So you gave up chocolate, what’s the big deal?”.

Well, in order to put this tale into context I need to take you back to November the 4th 2013, to the day before I departed for Mysore with my Mother. I could be found standing in Waitrose in front of the selection of Lindt dark chocolate.

For several years I have religiously had a daily croissant or pain au chocolat after practice, a little something sweet at lunchtime and 2 or 3 squares of dark chocolate every evening after dinner.

So I was a little concerned that I wouldn’t be able to get my hands on the rather lovely ‘A touch of sea salt’. Which as the name implies is Lindt dark chocolate with sea salt. To my dismay it was sold out, but that didn’t stop me buying 8 100g slabs of various flavours of Lindt. So on departure for Mysore I had in my luggage nearly a kilo of chocolate.

I also had half a kilo of some of the finest coffee beans in the modern world, but that’s a story for another time.

If you’ve been to Mysore you may be chuckling to yourself because the Chocolate Man’s chocolate is really rather good – but you don’t know, what you don’t know. I’d heard of this Chocolate Man in Mysore but I wasn’t taking any chances. That shows you how attached I was to maintaining a regular high quality supply! Sounds a little addictive, doesn’t it?

Over the years I’ve given up a lot of unhealthy habits including: smoking, drinking alchol and taking drugs. Since taking up the practice I’ve been able to eat anything I like with no apparent visible consequences.

But my sweet tooth and my lack of discipline around diet was definitely a sign of an imbalance and also of a deeper emotional need that I was trying unsuccessfully to fill. I also had a deep resistence towards changing this as I felt I deserved my little treats. It’s those things we hold onto tightest that we stand to benefit the most from letting go.

So, how did a man in my situation end up giving up on this passion? Leia, my other passion suggested one evening that we should give up chocolate and sweets during the week, and only enjoy them, like mature adults, on weekends. She’d been influenced by my bad habits of eating pasteries and sweets every day and it needed to change. So in an act of reluctant solidarity, I agreed.

This was a big change to make in just a few weeks and the consequence has been that I went through a stage of being ravenously hungry most of the time and I still seem to need to eat a lot. Despite this I began to lose weight within a couple of weeks.

My theory is that the high sugar food was affecting my digestive fire by slowing down the rate that I burned through my food. My metabolism is now much more effecient!

As a daily practitioner of several years I wasn’t carrying much extra weight to start with and I didn’t have any body image issues about being fat or overweight. So this sudden change has been unexpected.

When I was in my third year of daily practice – My body went through big, and what felt like traumatic, changes. This was a difficult period of pain, weight loss and lack of energy. I felt most of the time like I was running on empty and I drank a lot of coffee and ate a lot of chocolate in order to try and get some energy.

This time around things felt completely different. One example of this is that I’ve been practicing Nauli Kriya each morning for a number of years and I’ve only ever been able to roll in one direction. After a few weeks without chocolate or pastries, I was suddenly able to roll in both directions. I have a much deeper and definite connection with my core and this has translated into a stronger, lighter practice.

This new found inner strength seems to have enabled my hamstrings to suddenly release which has meant that my back feels very different in forward and back bending. In fact, I’m now free of back ache during and after practice. But I’ve also not had a corresponding loss of energy that I had in previous years. This may very well have to do with my changed of schedule and work routine too.

More specifically I’ve noticed a big differences in being able to bind more deeply, taking my wrists in Marichyasana C, Marichyasana D and binding and balancing more easily in Passasana (still no heels to the floor for me on that one). The loss of weight means I’m jumping back and through much easier and of course holding uttpluthi for longer is also possible. I’m also lifting up and jumping back from padmasana after kukkutasana and uttpluthi even on days when I’m tired.

It’s been over 3 months now since I made these changes and I feel completely different in my body. It’s great, and I’m quite intrigued to see where it all leads. I still seldom indulge in a small piece of chocolate or a mouthful of ice cream, on special occasions, but I have noticed that if I have any more than a thimble, I get a headache and it makes me feel sick!

More importantly I don’t crave these foods any more and don’t feel like I’m missing out, except occasionally when Leia is enjoying her other passion: ice cream.

I’m the founder of Ashtanga Brighton and have been getting on my mat since 2006. Originally from South Africa, I grew up during apartheid but moved to the UK in my early twenties - and haven’t looked back since. I’m passionate about freedom and creativity and now run a digital media agency, Wildheart Media - helping yoga businesses grow.
View all posts by Guy →
Mysore self-practice demystified
Going for a dream and then letting it go