If you’ve ever spent time with me in Mysore then you’ll know how much I admire and respect the work of James Boag. In fact I probably didn’t stop banging on about him!

From the first kirtan of his I went to in early 2014, I was blown away. I’ve been to a lot of kirtans over the last few years and I’m still amazed at how different they can be. I guess it’s just like the Ashtanga practice – people often think you’d get bored doing the same asanas day in, day out. But what they don’t realise is that every day is different – you feel different, you’re in a different mood, your body feels different, you have a different experience, you’re probably practising next to different people and in a different place in the room (unless you’re really stuck in your ways of course!).

It’s the same with kirtans. Obviously there’s the variation that comes with different facilitators, as each one has a different voice, approach, musical skills, their own versions of the mantras and their own unique energy they bring to the practice. But I’ve found that even with the same facilitator you can still have a very different experience each time. Of the 10 or so kirtans I’ve been to with James Boag, some were a cappella and some were accompanied; some were just him and some were with other musicians; some were mellow, beautiful and trance-like and some were uplifting, energising and incredibly joyful. 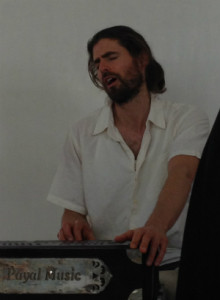 But for me, every one of James’ kirtans left me with such a strong feeling of inner bliss, peace and contentment. I felt more engaged and connected to other people and with my surroundings. I guess you could say that practising kirtan almost instantly connects me to the place I’m trying to get to in my yoga practice – but without all the flip-flopping about on the mat!

James has the most stunning, beautiful and powerful voice and the amazing acoustics in his house in Mysore emphasise this even further. I could listen to him all day. In fact I sometimes do just that, as I have some CD and mp3 recordings of him to keep me topped up!

As well as leading kirtans, James also holds satsangs and teaches yoga philosophy classes. He’s lived in Mysore on and off for many years and completed an MA in Sanskrit there too, so he certainly knows his stuff. When it comes to talking about philosophy, he has this great way of keeping everything very clear, grounded and easily relatable to our yoga practice. I think many people find traditional yogic philosophy a bit dry or a bit intangible, and struggle to see how the teachings can be related to our own every day lives. But James doesn’t talk in riddles or about weird, esoteric, arbitrary stuff… He keeps everything very real and very relevant.

Relating to the real world 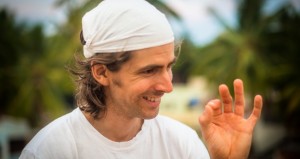 But more than this, he has the unique ability to relate the philosophical teachings and stories not only to our yoga practice but to us, as ordinary people living ordinary lives. Because we’re all humans having a human experience. During one of his classes in January 2015, he was telling us some of the stories about Lord Ganesha in the funny and brilliant way he does. He got to the end of one and I remember thinking “Well, ok, that was a very nice story, but what does it mean? What significance does it have in the real world?”

And then Bam! There it was.

With one fell swoop he delivered the ultimate punchline, summing up the story in terms of its very clear, succinct and direct meaning, which until then had completely eluded me.

So I actually believe that anyone interested in looking deeper within themselves, or searching for that inner truth, would benefit from James’ talks. You don’t have to practice yoga or be interested in yogic philosophy to be able to appreciate the insightful words of wisdom that he offers.

And if you don’t believe me, here are just a few of the precious nuggets I’ve taken from his teachings.

Unfortunately, James has just finished his last season in Mysore, but he runs classes and workshops at various locations across the UK, Europe and further afield. Check his website for more info.

We’re hoping to organise a workshop with him in Brighton later this year, so watch this space!

Have you experienced James’ magic?

What did you think of his kirtans, satsangs, or philosophy classes? Did they move and inspire you as much as they did me? Let us know in the comments below, we always love to hear what you think.

My long-standing interest in words and language and my abhorrence of misplaced apostrophes makes me the perfect editor for Ashtanga Brighton. I’m a born and bred Brightonian and have had a daily Ashtanga practice since 2009. I trained as a Thai massage therapist in 2014 and would love to make a living from writing too.
View all posts by Hannah Moss →
A mindful approach to Ashtanga Yoga at Samye Ling
Earth Loaf Soul Food: from bean to bar