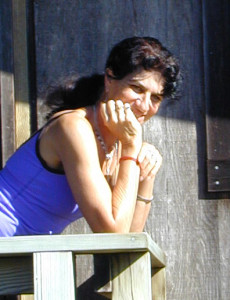 Josetta and I have now taken over from Laura as Brighton’s representatives in Berlin…and having a really great time studying with Nancy Gilgoff.

These two weeks are for students who are already familiar with the kind of concepts Laura mentions in her post, so now it’s all about moving on with the practice and doing lots of exciting new things!

One of the major points Nancy’s been making to us is to balance primary and intermediate, even from an early stage in your practice, to prevent injury and keep the body balanced. So she’s been taking us further into the adventure of intermediate than we’ve ever been before, with some advanced people too learning new stuff.

With so much being learned,  the atmosphere in the room is great: people are laughing, trying things, falling over, asking questions, helping each other, and so on. It feels really experimental, fun and collaborative – a long way from the serious solitary experience ashtanga practice can be.

As for Berlin, it is a great city – so right for yoga practice in that it has health food stores on every corner, and loads of art which you can appreciate even more after being opened up by the practice. It feels good to be in a city that’s not just about making money, as London sometimes feel like, but is about art and ideas too.

Anyway, look forward to seeing you all soon.

I've been a regular Ashtanga practitioner since 2000 after hearing about it on holiday in Mysore. After returning to London I started practising with Gingi Lee at the Sangam in Clapham, stepping through that auspicious red door into a whole new world. Since then I've moved to Brighton and become a regular student of Nancy Gilgoff, whose approach to the practice has helped me greatly.
View all posts by Louise Jolly →
Q&A with Sharath
Ashtanga Babies

One Response to More from Berlin