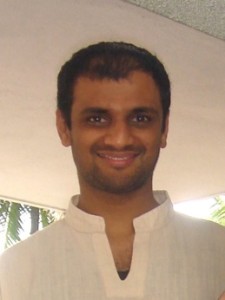 As part of Sharath’s workshop last week I went to a Q&A, where Sharath first gave a short talk before taking questions from students.

Here’s a short summary of what I remember!  Sharath talked about the eight limbs of yoga, of which asana is the third – saying that asana is actually the foundation of all the other limbs. He said it’s hard to practise yama and niyama unless your body and mind are first purified by yoga – then yama and niyama start coming naturally, and you naturally start wanting to find out more about them (likewise meditation).

He also said you have to have faith in the practice and in your teachers, and that the practice changes you even if you don’t always notice it (other people will!).

He chuckled, laughed and smiled through the entire talk, which was nice – a contrast to his seriousness when teaching.

“When should you start pranayama?” Answer: “When asana is perfect”, ie, the nervous system and lungs have to prepared first through asana.

“When should you start intermediate series?” “When you are perfect in primary series – if you can’t do dropbacks it will be difficult to do ustrasana. You have to master primary series first or you’ll be like a barber who cuts a bit here and a bit there, and ends up making a mess!”

On injuries: “asana is the healer”. Sharath talked about his own injuries and how he got through them with patience and perseverance, cutting back his practice to half-primary at times.

It was great to spend a week doing counted primary series led by Sharath. The last day was particularly dedicated to Guruji, and people brought in flowers and pictures for the shrine.  Sharath led us all in a chant to him, which was very moving. I would replicate it here but my Sanskrit is not quite up to the task!

I've been a regular Ashtanga practitioner since 2000 after hearing about it on holiday in Mysore. After returning to London I started practising with Gingi Lee at the Sangam in Clapham, stepping through that auspicious red door into a whole new world. Since then I've moved to Brighton and become a regular student of Nancy Gilgoff, whose approach to the practice has helped me greatly.
View all posts by Louise Jolly →
Self Practice Group
More from Berlin

One Response to Q&A with Sharath