(Title adapted from Ghostlight and the Parliament of Birds, Nick Evans 2009). 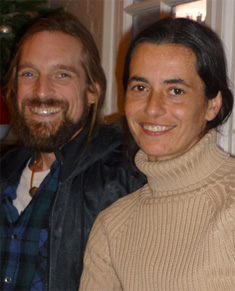 Nick and Katya at The Sanctuary

On Saturday we had a little gathering to bid farewell to Nick Evans who’s been teaching at the centre for the last 3 months. It’s not been his first visit teaching in Brighton and I get the feeling that he’s had a great time here. 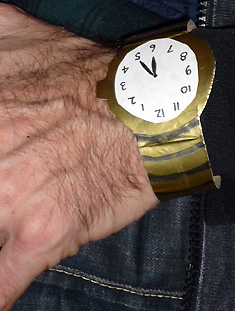 One of the low points of Nick’s visit was the theft of some of his personal belongings while teaching yoga at the centre on a Monday night. Man, the karmic consequences are serious! Nick’s Guruji style gold watch was stolen, so one of our farewell gifts was a large denomination note encased in a hand made imitation gold watch (made out of a toilet roll and gold wrapping paper!)

One of the things I really like about Nick is that he’s not one dimensional. He’s completely devoted to the traditional method of Ashtanga Yoga and adhering to Guru Parampara while being passionate and engaged in other aspects of creative expression and life. He is so very much alive!

This week we’ve been practising sans teacher at the centre and it’s a special time, there’s a little hardcore group of us practicing with 5 of us on Sunday and 6 on Monday. It feels like we’re keeping the Ashtanga flame burning brightly as we mark the Winter Solstice with the burning of the clocks.

I’m the founder of Ashtanga Brighton and have been getting on my mat since 2006. Originally from South Africa, I grew up during apartheid but moved to the UK in my early twenties - and haven’t looked back since. I’m passionate about freedom and creativity and now run a digital media agency, Wildheart Media - helping yoga businesses grow.
View all posts by Guy →
Christmas Self-practice at BNHC
Ashtanga Brighton 2009 web stats

One Response to Remember me as you shine so brightly