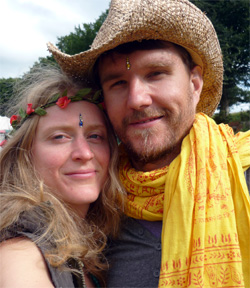 This year was a particularly special festival for us as Hannah’s sister was visiting the UK from New Zealand with her two boys. We went down on Monday before the festival started as Hannah’s mother is one of the managers of the Buddhafield cafe. I really enjoyed being there with the crew before the festival started. There were a few hundred people on site by the Monday we arrived.

We quickly found a few other Ashtangi’s in the cafe crew to practice with so it was back to practice again on Tuesday morning. If you’ve ever been to a yoga camp or practiced yoga at a festival you’ll no doubt be aware of challenges of practicing outdoors in a tent. Firstly even flat ground is not flat and it’s generally much cooler than practicing indoors.

So all the standing postures become rather challenging. Utthita Hasta Padangusthasana is a hoot, jumping back and through in the seated postures is also a bit crazy depending if you’re on an uphill or downhill angle. Postures like Marichyasana C and D are also made rather interesting too! My first response was: ‘why don’t the organisers build a nice flat platform?’ but that’s just the city boy in me. You do have to maintain a sense of humour and adventure when practicing closer to nature. I also think there’s a lesson in letting go and allowing things to be imperfect (or perfect) whichever rocks your boat.

I really enjoyed our self practice mornings in our little group while things were still quiet. The festival officially started on Wednesday and more and more people steadily arrived. Joey Miles (now based in Leeds) regularly teachers at Buddhafield or at least has done the last 3 years I’ve been going. He taught the 6:30 – 8am  Ashtanga class which was billed as ‘intermediate’. I’ve only ever done led classes with Joey and I love his direct no nonsense style. He really does inspire you to work hard. The class was a mix of primary, intermediate and one cheeky little modified posture from 4th series or advanced A – Astavakrasana. It’s not actually as difficult as it looks!

During the festival we had opportunities to chat with Joey on a range of topics including going to Mysore with children and how having children affects one’s practice. We don’t have children yet but it was really interesting to hear Joey’s experiences. The one thing that struck me while hanging out with Joey is his love for the practice, there’s a twinkle in his eye when he talks about practicing in Mysore and attempting really challenging asana from 4th and 5th series.

This has inspired me to approach my practice with a joyful attitude. I can’t recommend Buddhafield festival highly enough. It really is a treat! For more about the festival, music, ecstatic dance, tantra workshops, check out my posts from previous years: Buddhafield 2008 – Connecting with abundance and Buddhafield 2009.

I’m the founder of Ashtanga Brighton and have been getting on my mat since 2006. Originally from South Africa, I grew up during apartheid but moved to the UK in my early twenties - and haven’t looked back since. I’m passionate about freedom and creativity and now run a digital media agency, Wildheart Media - helping yoga businesses grow.
View all posts by Guy →
David Williams workshop, Triyoga, 15-18 July
Local Handmade Yoga Mat Bags