When David Swenson’s name popped up in an email from Triyoga in London, promising teaching on the FUNdamentals of ashtanga, I decided to treat myself to one of the sessions last Sunday. The class that appealed most was ‘Half and half and twice the fun’ – half primary followed by half intermediate. I enjoy this kind of practice and wanted to experience how David would approach it.

He began with a quick talk on how Guruji taught him the sequence – full primary with intermediate poses added on afterwards, making for a longer and longer practice. He thought Guruji’s strategy here was to keep adding postures until students couldn’t take any more, and stopped of their own accord.

It makes a lot of sense for students to find their own stopping point. It’s empowering and helps us get to know ourselves. David said he would teach us in that way, taking us through intermediate until he saw a collective look of desperation that said ‘enough!’

As we launched into intermediate after navasana, the energy in the room picked up and David’s sense of humour started bouncing off it. His stories and images seemed to get more off-the-wall with every pose.

For example, after we finished at eka pada sirsasana, he went through the rest of intermediate in a story form. The yogi asleep in yoga nidrasana dreams of mad insects (titibhasana), stinging a peacock (pincha mayurasana), the sight of which causes a crocodile to come out of the river (nakrasana) and scare a horse (vatyanasana) which rears up, gallops through a gate (parighasana) and jumps onto a cow (gomukhasana).

To express awe at such a turn of events, the yogi then just has to do seven headstands. It’s the only possible response. 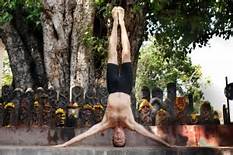 This dramatic, surreal story captured the energy of intermediate – it gave us a real sense of these poses while we just sat back and laughed.

A room of bouncing crocodiles

David then managed to top the surrealism by getting the whole room trying nakrasana. If there are even two people in a room doing nakrasana at the same time, it’s impossible not to laugh – so you can imagine what it’s like when 40-odd are doing it. ‘Get really good at this and someone can ride on your back,’ said David. ‘Some teachers even like to enter the room that way.’

I've been a regular Ashtanga practitioner since 2000 after hearing about it on holiday in Mysore. After returning to London I started practising with Gingi Lee at the Sangam in Clapham, stepping through that auspicious red door into a whole new world. Since then I've moved to Brighton and become a regular student of Nancy Gilgoff, whose approach to the practice has helped me greatly.
View all posts by Louise Jolly →
James Boag Workshop: storytelling, meditation & kirtan
Yoga in story and song: James Boag in Brighton