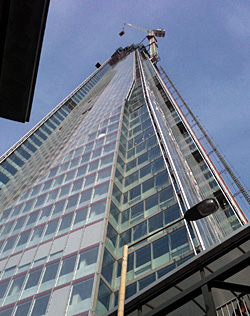 We’d been looking forward to John Scott’s evening workshops for some time, so it was with some considerable disappointment that we missed the first session due to the burst water pipe in Croydon which plunged the whole of the south east into complete chaos. Luckily we made it up to Stillpoint Yoga on the second evening and marvelled at the sheer size of the Shard building as we exited London Bridge station right underneath it.

We had no idea what to expect from the sessions, as we discovered John Scott is renowned for his casual approach to workshops, preferring to wing it on the day than plan every minute detail in advance – at least this is certainly how it came across. So as we sat in Starbucks across the road watching the organiser, Scott Johnson, and other excited yogis tucking into coffees, smoothies and sandwiches we found ourselves wondering whether there was going to be any asana practice at all. Once inside the studio, these concerns were further enhanced by a friend who told us the Monday evening session had consisted mainly of talking, pranayama and meditation.

But once the workshop got underway we quickly forgot about our worries as John’s gentle voice and inspiring words led us on a fascinating journey of exploration and discovery. He encouraged us to explore the physical development of a baby’s anatomy and experiment with how a baby finds its centre of gravity and learns to sit, knee and crawl. It was eye opening to realise how much strength it takes to make these tiny baby movements and how quickly this strength can be built up.

We progressed very gently through the surya namaskaras and some of the way through the standing sequence using these small but very focussed baby movements and it was astonishing to discover how much effort this required. He also asked us to join him in calling the Sanskrit count out loud whilst we were moving through the sequence, something which I’d never experienced before and found quite challenging, as coordination of the count, followed by the breath and movement was key. At the end of the session John gave a very inspiring speech about sharing yoga with others, with two memorable quotes being “every yoga class is teacher training” and “we teach others what we most need to learn ourselves”. Great stuff!

On the Wednesday evening we were expecting more of the same but were in for a shock! Apparently Scott had told John to “give them one tonight” so it was a much more physical asana session. However, rather than merely count through the primary series, this was a led class with a difference. John incorporated many of the movements we’d learnt the night before so that he’d lead us gently from one baby movement to the next, then say “now just lean forward and see if you can move your arm this way” and before we knew it we all found ourselves happily sitting in Marichyasana A without quite knowing how we’d got there – and letting out an audible “aah” of realisation! We found ourselves moving into many of the postures this way, which provided a uniquely different perspective than simply launching straight in to the full pose as we so often do normally.

John brought a great deal of humour and humility to the sessions and I found myself fascinated and inspired by all he had to say. He has a very gentle, yet very solid and dedicated approach to the practice and I could quite happily listen to him talk about yoga all day! It was a shame we only got to practice twice with him but it was definitely worth it and both Guy and I are already eagerly anticipating our next opportunity to practice with him – whether that’s in New Zealand, the UK or beyond! 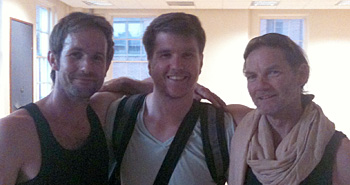 I’d like to thank Scott and Oz for their hospitality and for putting on such a great workshop. Their studio, Stillpoint Yoga, is a lovely big space fantastically located right next to London Bridge station and it was great to finally practice there with them.

My long-standing interest in words and language and my abhorrence of misplaced apostrophes makes me the perfect editor for Ashtanga Brighton. I’m a born and bred Brightonian and have had a daily Ashtanga practice since 2009. I trained as a Thai massage therapist in 2014 and would love to make a living from writing too.
View all posts by Hannah Moss →
15% off Narayani’s new Kirtan album
Mysore style in Edinburgh