I know that the economic recession has been declared as officially over but my finances certainly don’t reflect that. In fact things are tighter now for us than they have been for at least 8 years. With this in mind one of my teachers suggested I practice a Mantra to invoke Lakshmi the Hindu Goddess of wealth. The Mantra should be chanted 108 times and is: “Om Shriim Namah” 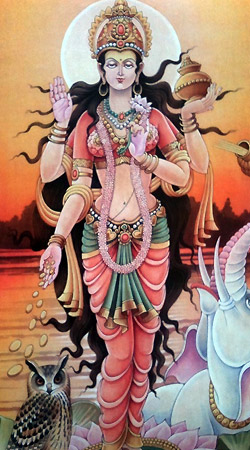 Lakshmi is the goddess of light, beauty, good fortune and wealth. Being the consort of Vishnu, the preserving principle, Lakshmi also signifies love and grace. While Lakshmi is generally worshiped to achieve success, she does not reside long with anyone who is lazy or who desires her only as wealth.

She is the power of diversity and also the mother of desire (Kama – check out the post on Nishkama Karma for more on this). Though many deities are associated with the purity of the lotus, Lakshmi above all represents this purity. As the consort of Vishnu, she appears with him in every one of his incarnations, mainly as Radha to Krishna and as Sita to Ram.

Find this interesting? Check out the post on Surya the Sun God. He’s the deity invoked with the Surya Namaskara or Sun Salutations at the beginning of the Ashtanga Yoga practice.

I’m the founder of Ashtanga Brighton and have been getting on my mat since 2006. Originally from South Africa, I grew up during apartheid but moved to the UK in my early twenties - and haven’t looked back since. I’m passionate about freedom and creativity and now run a digital media agency, Wildheart Media - helping yoga businesses grow.
View all posts by Guy →
Making Global Connections
Practice, practice, and then what?