A rather belated happy new year to you all! This week has been my first week back at practice after about a 3 week break. So I’m rather relieved that it’s Friday tomorrow! Yay!

This post is about a month overdue as Russell and Sally’s workshop was on the 6th December! 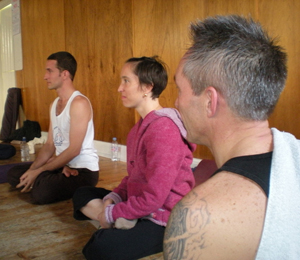 Russell and Sally ran the Mysore room in Brighton for some years and have been significant in establishing the traditional morning Mysore class method of teaching. I was lucky enough to get a lift with David one of Russell’s students. The workshop was organised by Scott who is doing a great job at attracting world class teachers to the South of England to do workshops. Thanks Scott and keep up the good work! You can check out his website for upcoming workshops. Or check out our workshops section.

It had been a year since Russell & Sally had been in the Brighton area so David and I were rather excited about seeing them both again. I was expecting to see a few more faces from Brighton but as it turned out there were only 4 of us. There were about 25 – 30 people at the workshop including a few local Ashtangis from Tunbridge Wells.

The workshop started off with a led primary up to Kurmasana including finishing sequence all with a rather slow count which Russell says is all the rage in Sharath’s led classes in Mysore at the moment. I’ve not done a led class in ages so it was pretty tough going. Then there was a break followed by a break down of the first vinyasas of Surya Namaskara A and some partner work to help with the jumping and lifting. 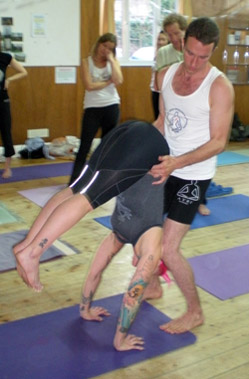 This was pretty much the same as Russell’s workshop last year. Again I found it extremely useful. It seems like I can never stop refining Surya Namaskara. Russell’s been practicing with dedication for many years and can do all that nice floating stuff that looks rather impressive. He mentioned two issues that most of us face that aren’t immediately resolvable: Tight hamstrings and short arms. Oh well never mind. 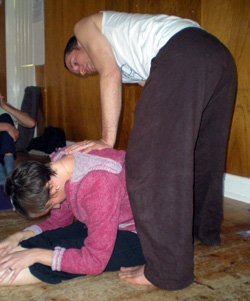 We then worked our way in some detail through the primary seated postures up to Kurmasana. Some may be interested to note that all the standing postures and the finishing postures are not actually part of the primary series. To quote David Swenson they are the two slices of bread between which we put whichever series we’re doing that day (assuming of course you’re experienced enough to have different series to choose from)

The workshop ended with a short meditation led by Sally who practices Vipassana. She reminded us that traditionally the practice of Asana was a preparation of the body for Meditation and the realisation of Samadhi. The sit was a nice way to end the workshop and gave me a chance to absorb what we’d been working on and consider my motivation for practice.

It was great to see Russell and Sally again and the following week they took the Mysore classes at the bnhc which was also a great week. We wrapped up the week with a farewell potluck in my little studio flat where Russell and Sally shared some of their experiencing teaching in Asia and admired my Star Wars toys.

I hope they both have a great year and look forward to seeing them both at the end of the year again.

I’m the founder of Ashtanga Brighton and have been getting on my mat since 2006. Originally from South Africa, I grew up during apartheid but moved to the UK in my early twenties - and haven’t looked back since. I’m passionate about freedom and creativity and now run a digital media agency, Wildheart Media - helping yoga businesses grow.
View all posts by Guy →
Reflexology and Aromatherapy
Acroyoga’s coming back to Brighton